Thoughts on Sediment in Wine

Have you ever wondered why there is what looks like sediment or crystals on the bottom of your cork or on the inside of the bottle?  Or why some wines seem to have more than others?  You certainly aren’t alone.  We receive a handful of emails every year asking these exact questions.  Let’s deep dive into the interesting world of why wines form crystals.

First of all, the crystals, or precipitated tartrates (KHT Potassium Bitartrates) as they’re formally called, are completely normal.  In fact they are considered by many a sign of balanced winemaking.  Even though most high-end wines are filtered to less than a micron just prior to bottling, solids form when potassium and tartaric acid, both naturally occurring components in grapes, bind together to form a crystal.  The crystal tends to prefer growth on rough vs smooth surfaces hence it’s deposition on the cork’s bottom.  This sea-salt like substance is completely harmless and natural.  They do tend to form somewhat faster in wines cellared at colder temperatures (below 40F).

Forbes: One Vintner’s Tale Of Peril In California’s Napa Valley 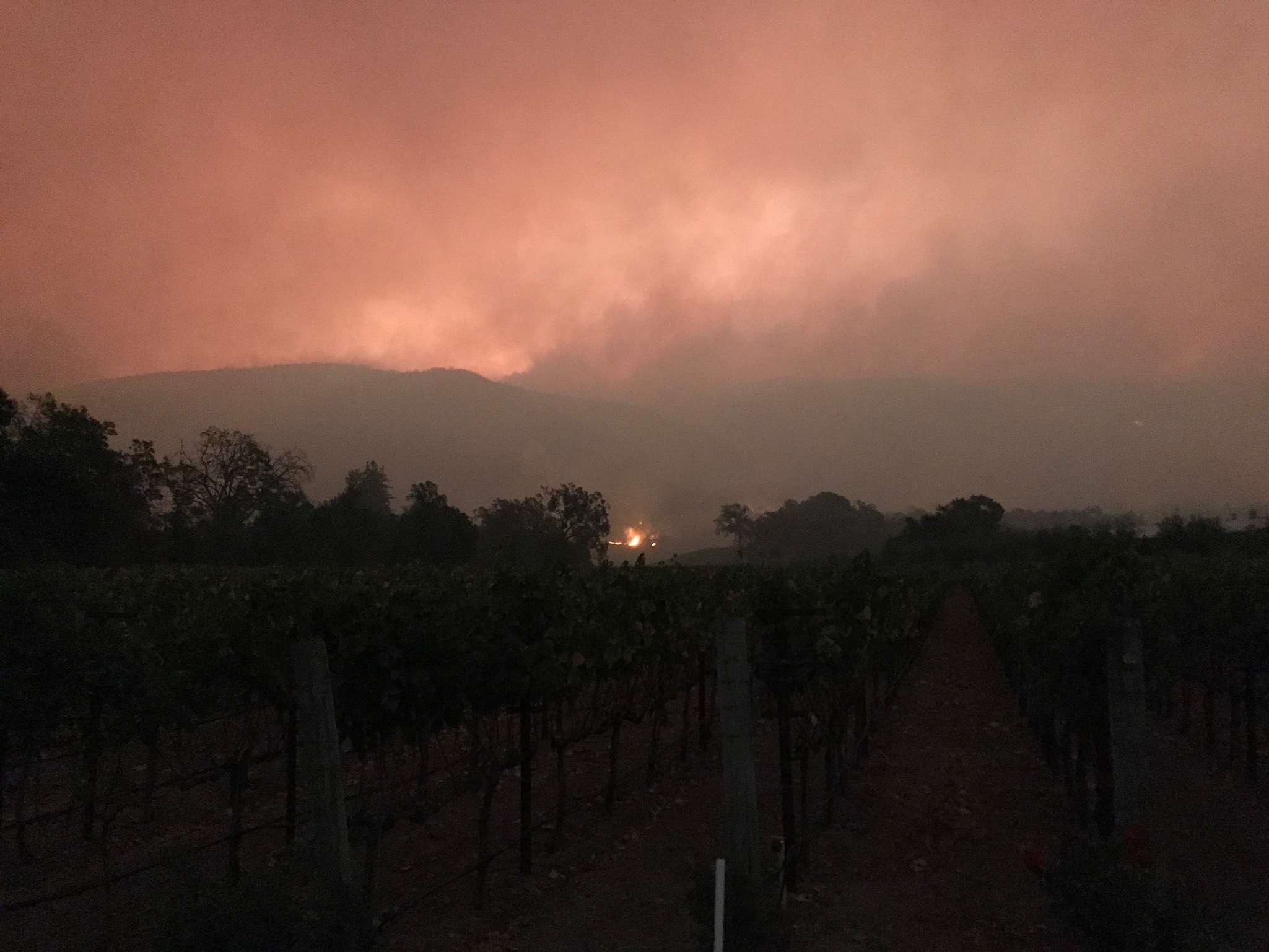 Fire On The Mountain: One Vintner’s Tale Of Peril In California’s Napa Valley

Sunday, October 8, 11:00 pm: Napa Valley winery owner Christian Palmaz received a text from a buddy with news that a fire was spreading through Atlas Peak, about two ridgelines away. Christian thought little of it. He had no inkling he would soon be facing the first of seven fires ignited that night, the beginning of what became a raging inferno, raining hell on Sonoma, Santa Rosa, and Napa—claiming 42 lives, decimating over 6,000 homes and businesses, and damaging or destroying 27 wineries. As I am writing this, fires in Santa Rosa are contained, but not out.

12:00 am: “I could see the glow on the top of the mountain,” says Christian Palmaz, owner and operator of Palmaz Vineyard in Napa, California.  “No news agencies were reporting this; it was the first fire, the beginning. The power started flickering, and that was the first sign that this was something big, but there were no evacuation orders, nothing like that. We ended up losing power, so I drove to the winery to make sure the generators transferred over. When I came out at 1:00 am, the fire was near the property line. It moved half a mile in a matter of what felt like minutes. I couldn’t believe it.”

Reading my last post as of Sep 30th, it’s clear none of us ever imagined just 8 days later Napa and Sonoma would experience one of the worst urban fires in California history.  Although the property burned extensively, fortunately we and our staff were safe and only minorly affected by the fires.  Sadly the few parcels still hanging fruit could not avoid the proximity of smoke and ash.  We sent the fruit for extensive analysis and determined that while we could have harvested, it would be not have been towards a wine we’d be proud of.  Therefore we decided to drop the remaining fruit.  We are extremely fortunate that prior to the fire we had brought in almost 90% of the harvest.  While 2017 will be infamously remembered for generations, I am extremely optimistic that the wine will be one to remember fondly.  Our hearts and prays go out to those who weren’t as fortunate.

LA Times: Vineyards may have kept wine country fire from getting worse

Vineyards may have kept Wine Country fire from getting worse

But he didn’t have to worry about his vines. They’re green, very much alive, and a stark contrast to more than 500 acres of oak, manzanita and grassland charred by the Atlas fire as it tore across Palmaz’s property.

We don’t often think of agriculture and computer science in the same breath, but on Wednesday, Sept. 13, 10 computer science students from Indian Valley, Quincy and Chester saw first hand how the two go together.

Where Tradition and Technology Co-exist, Comfortably

As a fine wine specialist and someone who’s been in the business for over 20 years, I was both curious and a bit skeptical as to what this famously high tech winery was all about. Allow me to explain my cynicism. There tends to be a bias in the industry against what is perceived as “over produced,” or “showy” winemaking. As they say, “great wine is made in the vineyard,” not in a lab room. My goal was to see what the fuss was all about and if, indeed, the innovation made a difference in the wines.

From the first glimpse of the distinctive, handcrafted label, the wine lover begins to understand the Palmaz family ethos: “Love the land, know the grape and make a wine that honors both.”

To those familiar with the brand, a bottle of wine created by the Palmaz family evokes elegance, luxury, and the anticipation of pleasure on the palate.  This was the intention of Dr. Julio Palmaz and his wife Amalia when they founded the winery.  And so it remains today, as son Christian Gastón Palmaz and his sister Florencia continue the tradition started by their parents.

Digital Trends: The Winery of the Future Looks Like Something Bruce Wayne Would Run

When winemakers a century from now look back on the technology that changed the game, one winery is going to stand out: Palmaz Vineyards in the Napa Valley. Though ordinary in appearance at first glance, an amazing array of custom-built technologies lurking in a subterranean lair bolster the winemaker’s craft with exacting science.

Bringing Innovation & Invention to the Ancient Art of Making Wine

To those familiar with the brand, a bottle of wine created by the Palmaz Family evokes elegance, luxury, and the anticipation of pleasure on the palate.  This was the ignition of Dr. Julio Palmaz and his wife Amalia when they founded the winery.  And so, it remains today, as son Christian Gastón Palmaz and his sister Florencia continue the tradition stated by their parents. 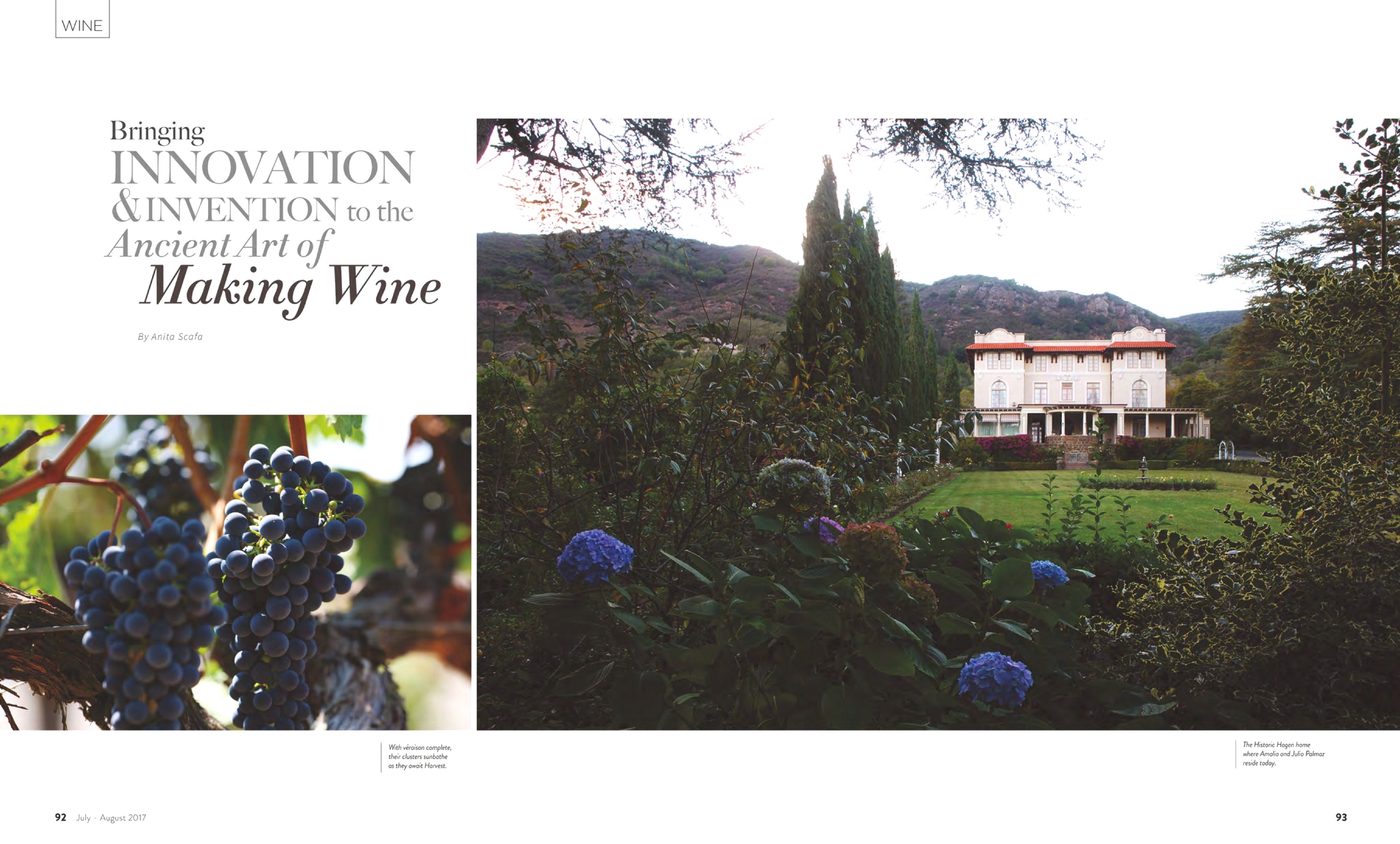 The tectonic plates that slammed together to form Mount George and the other noteworthy peaks at the southern end of the Napa Valley had long since settled by the time that Henry Hagan arrived in California in 1852. Drawn north from San Francisco by the allure of untamed wilderness and unbridled natural beauty, the industrious Hagan founded Cedar Knoll Vineyard and Winery in 1881 and set about the business of viticulture with the spirit of a pioneer. Hagan experienced success with his wines, growing grapes in the unheard of Napa Valley and serving them mostly to locals in the Opera Houses and other upscale establishments of the Bay Area.